[Originally published March 2, 2013] This change has been in the works for a few years now, but today marks the OFFICIAL closure on an amazing chapter in my life – designing, launching and selling my WilloToons – where geek meets rock ‘n roll! – gift line of products. It also marks the day I’m announcing my NEW online moniker: WilloLovesYou!

I’ll get to all that in a minute, but first a little history on the WilloToons name…

I registered WilloToons.com on March 28, 2000 – exactly 13 years ago this month! – the name playing off my cartoon-style illustration.

Mind you, back then we didn’t have vector graphics, and everything was so much smaller. In fact, I only had my first website a few years prior – hosted on Homestead back in ’98. I wish I had screenshots of that one! I do, however, have this screenshot from 2002… this is when I was still employed as a FT Web/Flash Designer at a boutique design/development studio in Potrero Hill. I had a blog on this website that I updated via HTML by hand… I was blogging before it was even called blogging!! 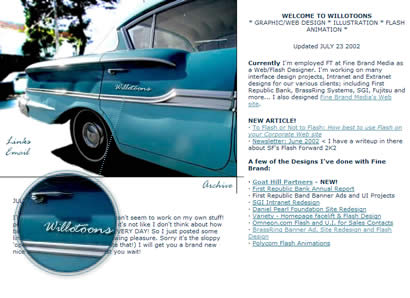 Screenshot from my homepage, July 2002

In 2003, the bubble had officially burst, and as a result I was (fortuitously) laid off my job.

I had already been doing freelance animation & design on the side and had been craving to dive more back into my illustration work, so I immediately launched a business offering Custom Wall Painting for Nurseries and Playrooms. I figured surely I could get some wealthy parents in Marin to pay me a thousand bucks every week for that & I’d be set!

I did get a few of those jobs… but being the avid blogger that I was (and having a large following of friends & fans), it wasn’t long before web & graphic design + custom illustration jobs started coming my way… and my freelance career was launched! 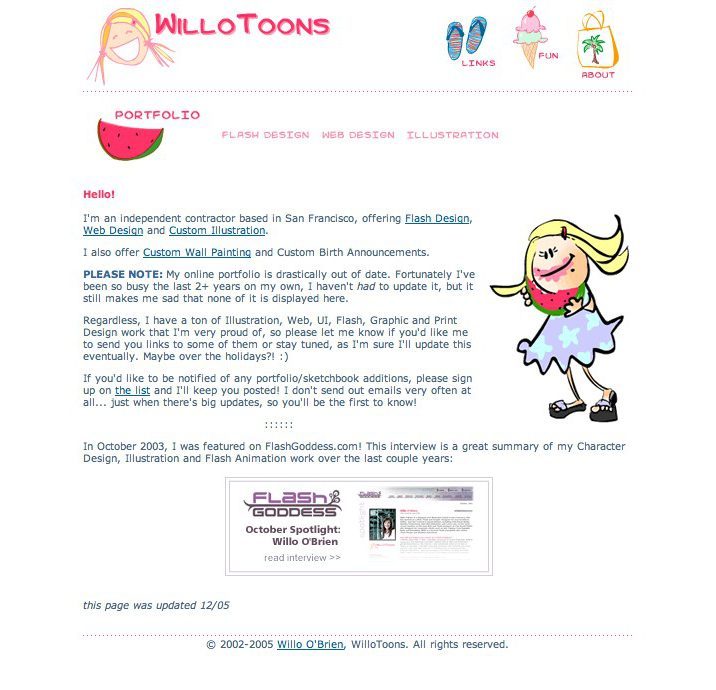 The WilloToons.com homepage from 2005. You can actually still go visit this one!
Common “Cobbler’s Shoes” problem… my site didn’t get as much attention as my paying clients’ sites did. But it did the trick! Within the first year going out on my own, I was making more than I did my previous FT job.

After 4 years doing freelance Design, Illustration and Animation for others, I finally followed my heart and launched my dream of my own line in 2007; featuring my designs & illustrations on tees for men & women and a baby line for all the kiddos of the geeks & rockers! 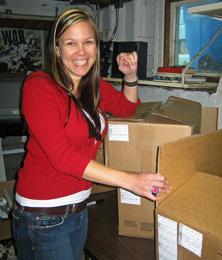 Over the moon getting my first few boxes of inventory! 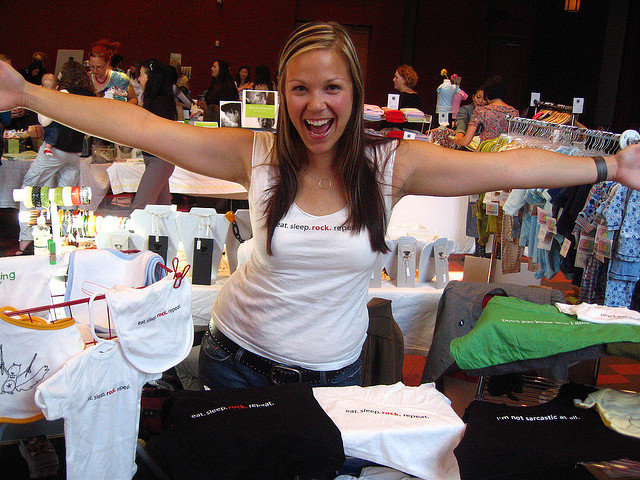 It should be noted here that starting in 2003, especially after I no longer had a job I had to show up for every day, I went to live music shows several times a week! Hence my ‘rocksquirrel’ design (squirrel illustration with drum sticks & star on his belly), and the emphasis on eat. sleep. rock. repeat – a design in my line that worked great for both adults and kiddos! 😉

My beautiful girlfriends modeled for me!

I loved my embroidered line – this ‘splash’ design especially!
And yes, I recruited all my friend’s babies, too. This is my friend Jess’ adorable little nephew Andrew.

Yes, I had tees for men, too! Again, my handsome friends modeled. You’re welcome. 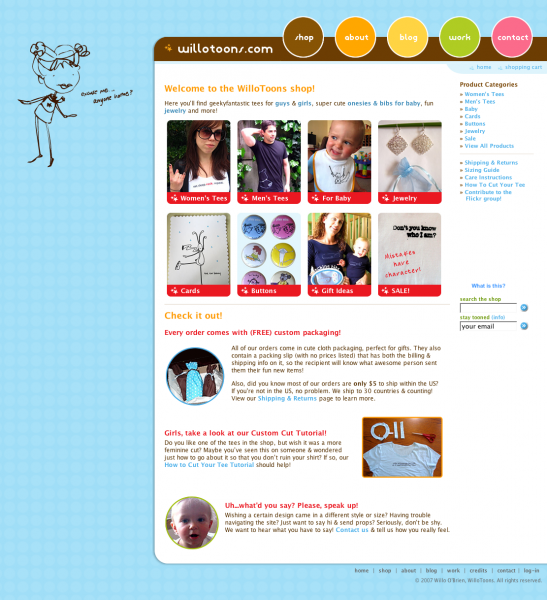 Over the next 3 years, my line evolved into different colors and styles. I had a designer t-shirt line for men & women, onesies, bibs and tees for babies and kiddos, totebags, greeting cards, jewelry, and more! 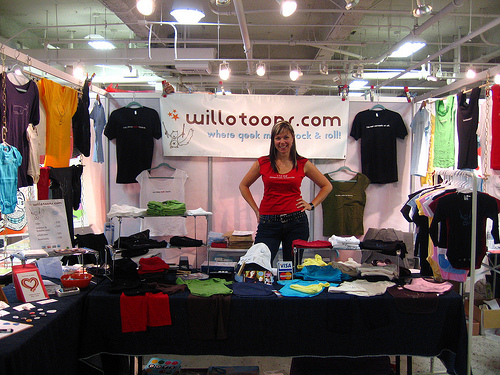 My WilloToons booth at Renegade Craft Show in LA, 2009
I worked the craft circuit for years around this time hawking my WilloToons wares! 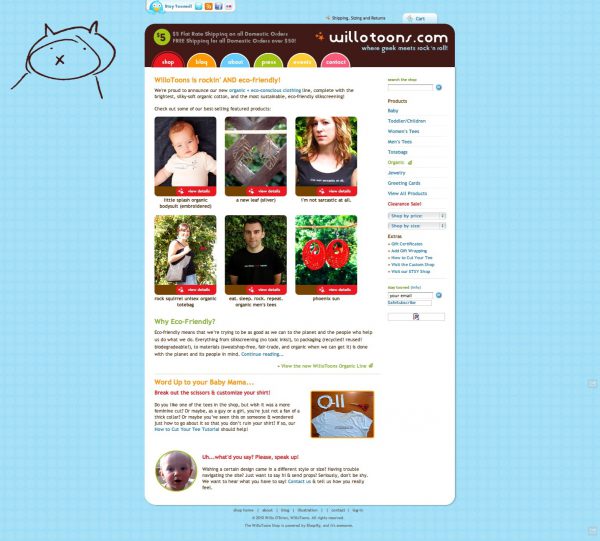 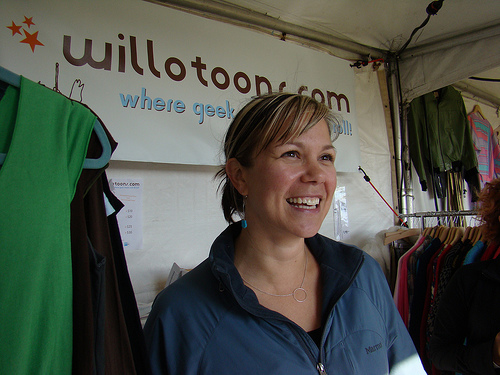 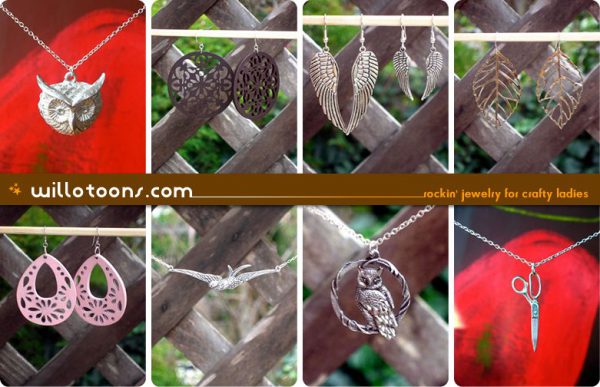 I had so much fun making “rockin’ jewelry for crafty ladies!” 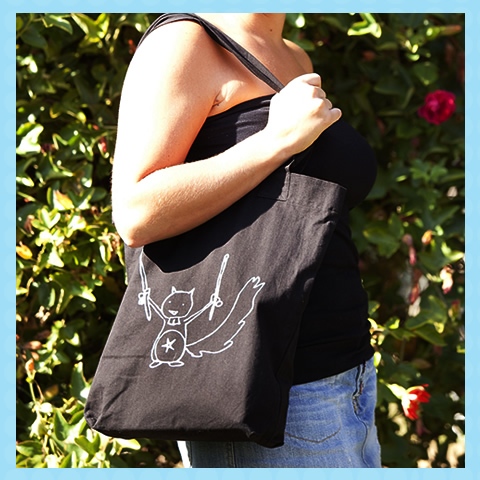 Leveling up in 2009, I launched an Organic & Eco-Friendly line 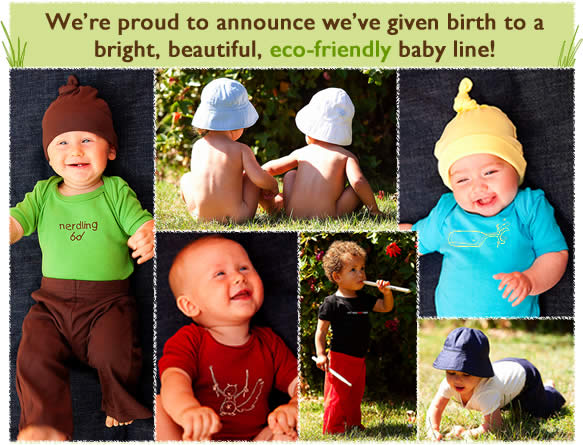 In 2009* I went to great lengths to find the best & brightest, silky-soft organic cotton, and the most sustainable and eco-conscious silkscreening, and launched an eco-friendly line of baby tees, onesies, pants & caps. They were a huge hit!

*Mind you, this was amidst a massive recession. The line was a hit with customers, but oof, it was also quite the challenging year financially!

Grateful for an Amazing Community of Support

One thing is for sure, I absolutely could not have done ANY of this without the amazing support of my awesome friends!!

They modeled for me, bought some of my very first tees when the website went live, came and supported me at shows – a few of them even helping man my booth!

I am eternally grateful for the guidance, support and love of the brilliant geeks & rockers in my life – THANK YOU ALL SO MUCH! 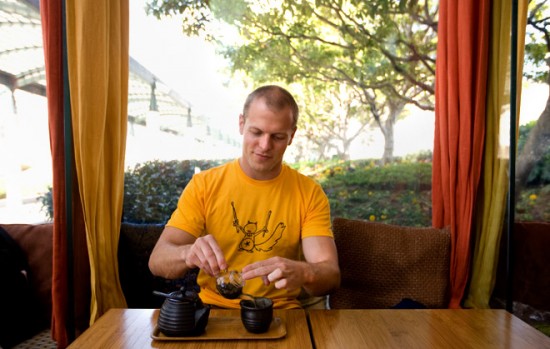 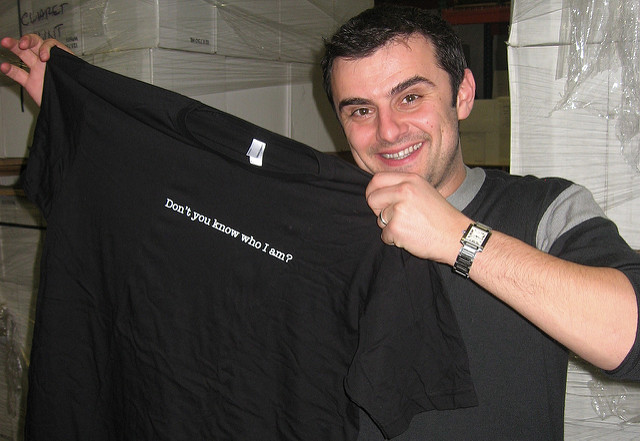 Through all of this, I also developed a community of WilloToons fans around the world.
Check out this awesome Flickr Pool of photos from friends, fans & happy customers!

I met amazing people while traveling around the country, garnered notable press, had the opportunity of speaking, teaching, consulting and inspiring fellow creative entrepreneurs, and learned SO much in the process!! 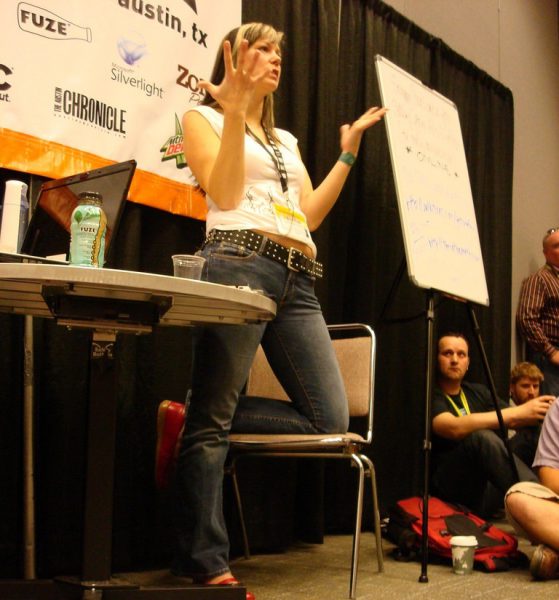 I’m ridiculously proud of what I created with this business. I followed my heart and made it happen, and the experience was truly life-changing, in more ways than one!

End of a WilloToons Era

When I said this change has been in the works for awhile, it’s because I actually first announced letting go of my line in January, 2011, and shortly after redesigned & relaunched my site with my “Inspiring Creative Sustainability” tagline and WilloToons Connect video series. However, I had kept the shop open to sell the last of it.

It’s with this announcement though that I can now report I have officially closed up the WilloToons shop! This isn’t really that big of news, but for me – after almost 6 years of having it, and 2 years in liquidating limbo – it feels both weird and fabulous all at the same time.

WilloLovesYou – The Story of a Heart-Centered Entrepreneur

WilloToons became my brand, but I’ve outgrown it, and it doesn’t fit the work I’m doing now. So, thinking of what I wanted to have my URL be, and my handle on all the zillions of online networks, I actually didn’t want it to just be @WilloOBrien… and instead I wanted to have something that communicates the thread of compassion and purpose I have infused in my life & business. And here we are… Introducing WilloLovesYou! 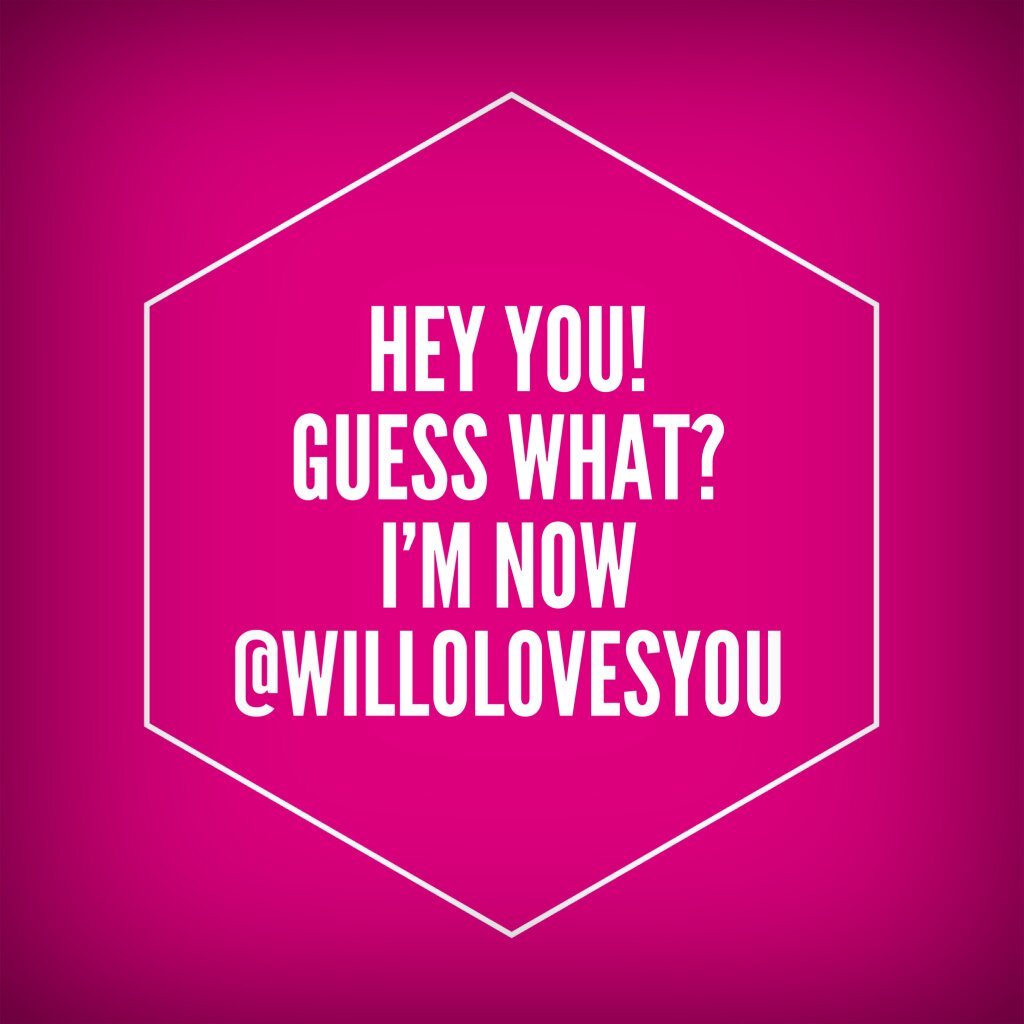 Less of a brand, and more simply my new online moniker, it’s a fun name that emanates the love I have for people, life and the message I want to share with the world.

The changeover happened on Twitter & Instagram on March 7th, and on my website on March 8th… so it’s official! It’s been so exciting to see friends celebrating with me. So much LOVE! <3 Thanks to all of you who supported me over the years. I truly couldn’t have done it without you!

Evolving at the Speed of Life

So here we are, my WilloToons shop has been officially closed, but this is hardly a ‘What next?’ moment, since that’s already been in full swing for a couple years now.

If you’re just tuning in, here’s what’s been happening:

When you get clear on what you want, change happens fast!

I have some very exciting developments rollin’ out over the next few weeks and I’m super excited to share them with you! Please subscribe, if you haven’t already, and you’ll be the first to know.

I hope this finds you well and following your heart!
I can testify, it’s damn well worth it, every step of the way. xo

Willo Sana is an international keynote speaker, a sought-after Transformational Business Coach, and intuitive strategist whose work empowers visionary entrepreneurs around the world to own their gifts, align their actions, and flourish in their calling. As a serial entrepreneur, Willo has founded several creative businesses over the last 18+ years. Her upcoming book, Double Down on Your Genius, will be released in 2022. Enjoy more of Willo's articles, videos, and interviews here →

Willo, I am so proud/happy/amazed/bewildered/psyched at what you do, how you do it, and how it affects others. Keep on keepin on!

Cheering from the sidelines,

Yay Willo!
So excited to see what happens!

Me too, lady! 😉 Still really hungry to collaborate with you on something, Momma. Let’s wine & brainstorm soon. <3

Hello Willow, I just came across your site as I started to watch your Twitter for Creatives course I bought through HOW-U. I’m only 4-minutes into it and I just had to visit your site and learn more about you and how you did it. The first thing I noticed was that you are no longer WillowToons and so I had to catch up on how that happened, which is how I ended up on this page. I resonate with your story and I feel like I’m struggling with my brand and could probably benefit from some coaching. Maybe you can recommend something for me? Congrats to your success and thank you for the inspiration!

I love supporting other creative entrepreneurs who want to thrive while doing what they love! I just sent you an email with details for scheduling a complimentary consultation with me. That way I can learn more about you/your business, and we can explore to see if my coaching services are a fit for where you’re seeking support.

Really fun to hear how you found your way here. Thanks for saying hello!