On December 5th, I was on stage for two big events.

The first of which is I had the honor of MCing TEDxFidiWomen 2013! 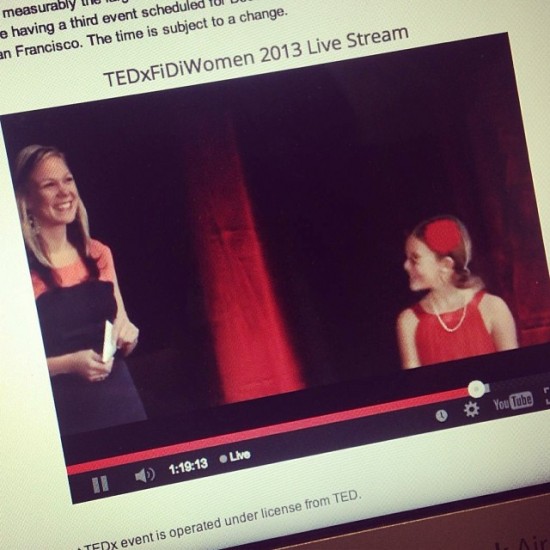 This is me introducing 9yr old speaker, Vivienne Harr, who has raised
over $100,000 with her Make A Stand Lemon Aid to help end child slavery!

2011
I had first attended TEDxFidiWomen, in 2011, which synchronistically led to this post about Jennifer Sherman’s inspiring talk, my launching my “Ladypreneur: Women Winning at Work” tumblr, that was then featured in Glamour! Not to mention all of the amazing women I met, and whose words and wisdom impacted me that day.

One of them being the ever-awesome SARK, who I’d met & spent time with way back in ’97 (which is also when/how I met Andrea Scher!), and I was able to relay to her that – inspired by her bio in Creative Companion, that I read while I was living in Boulder – I too now “live in a Magic Cottage with my cat in San Francisco!” :p

2012
The next TEDxFidiWomen I attended (2012), I contributed by designing an animated timeline of ‘Key Events in the Women’s Right’s Movement,’ that played throughout the day in the gallery:

2013
As you can see, I’m a big fan, so I was honored to support and contribute again by MCing the event! All of the speakers were *amazing* (you can watch all of their talks here!), not the least of which was the fabulous 9-yo Vivienne who’s on stage with me in that photo above.

In fact, super cool is that I know Vivienne’s parents from way back before they were even married! We were friends in 1998, when Eric was speaking at the Learning Annex, and I was the Events Coordinator there. It was so awesome reconnecting with him & (his now wife!) Alex, and meet their super cool kiddos! So neat how life works that way, huh?

On December 5th I was not only on stage all day MC’ing TEDxFidiWomen, but after dinner I hopped in a cab & cruised over to the Brava Theatre where I hopped on stage and delivered my first Ignite talk! I’ll post about that, with the video of my talk, when it’s published. It was two exciting events in one jam-packed-with-awesome day!

2014
I already have 4 exciting speaking events lined up this year, not to mention my own events/retreats (details coming soon!)… and, yes, I’m definitely planning on delivering my own talk at TEDx as well. Considering how much joy, knowledge and opportunity* they’ve brought my way, it’s about time, huh? 🙂

*In 2012 I also supported sweet Tanya Geisler by designing keynote slides to accompany her brilliant words of wisdom, and we’ve been working together ever since!

Big thanks & kudos to my awesome friends Michelle Fetsch & Gretchen Sweet, for putting on another great year, and here’s to an awesome year ahead!

Willo Sana is an international keynote speaker, a sought-after Transformational Business Coach, and intuitive strategist whose work empowers visionary entrepreneurs around the world to own their gifts, align their actions, and flourish in their calling. As a serial entrepreneur, Willo has founded several creative businesses over the last 18+ years. Her upcoming book, Double Down on Your Genius, will be released in 2022. Enjoy more of Willo's articles, videos, and interviews here →

[…] had contributed to TEDxFidiWomen events in San Francisco over the last few years, so it was wonderful to find ‘my people’ here, i.e. brilliant […]